WWW-Virtual Library: History
Map History / History of Cartography: THE Gateway to the Subject

Laying bare the secrets of the British Library's map collections

[Original introduction] The author is Map Librarian of the British Library, London. He describes how a database listing will make it far easier to find manuscript maps in the BL, and how some unusual printed items have come to light

Printed maps bound up in British Library archives tended to be ignored by cataloguers a hundred and more years ago. In the process of compiling a database index to maps in the Department of Manuscripts some 600 printed items emerged. 1 Among them are an incomplete first state of Richard Budgen's map of Sussex (with a hitherto unknown subscription proposal) c.1723, an annotated subscribers' list for John Warburton's map of Yorkshire c.1720, an unrecorded version of the Henry Overton map of Yorkshire (with an added Willdey sticker), and a broadside version of John Speed's "Suffolk". 2

Another printed map overdue for recognition is the 1592 Jodocus Hondius map of Portugal, which shares a sheet with a fine portrait of the royal claimant Dom Antonio. This belongs to the Cotton Collection and has been in the British Museum (now British Library) since its inception in 1753. Although examples must presumably survive in Portugal, the only other one known to Professor Günter Schilder is also in the BL. 3 Ironically, because that is in a volume, it too is uncatalogued. 4 [Afternote, October 2012: I am grateful to Willem Hovestreydt for drawing my attention to another example of the map, reproduced at p.96 in João Pedro Vaz, Campanhas do Prior do Crato: Entre Reis e Corsarios pelo Trono de Portugal (1580-1589) (Lisbon, 2005), where it is described as being in the author's own collection.] 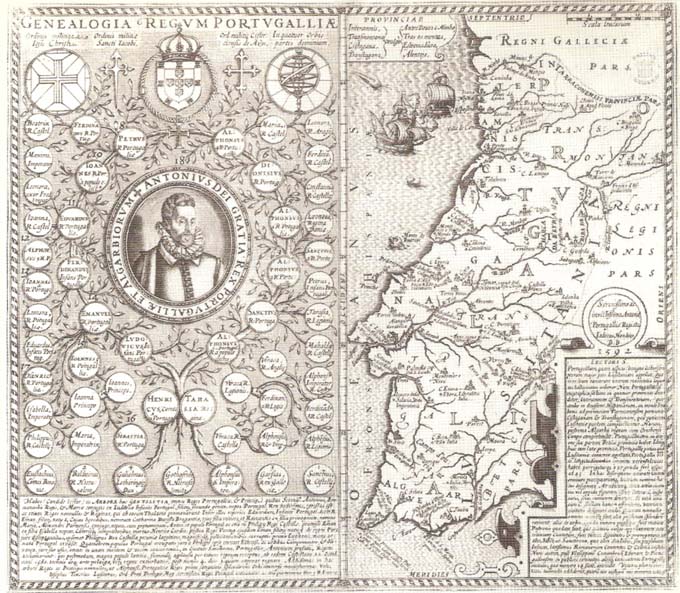 The finely engraved map of Portugal that Jodocus Hondius produced in London in 1592 has been in the British Library's collections since 1753. However, as a printed map in the Department of Manuscripts it had not been described previously. (British Library, Cotton MS. Nero B.1, f.3-4.)

Unexpected mapmaker names to emerge during compilation of the index include Baden-Powell, Burghley, Coleridge, 5 Dilke, Gladstone, Hawksmoor, T.E. Lawrence, Nelson, Ruskin, Garnet Wolseley ('"the model of a modern major-general") and Wren. The maps that illustrated the letters sent by Colonel A.M. Lang to his mother during the Indian Mutiny have a special interest, as does Siegfried Sassoon's trench map for the area around Flicourt, as described in the Memoirs of an Infantry Officer. Alicia Oldfield is the only woman identified among the authors of the BL's hand-drawn maps. Her early nineteenth century map of Montreal and its neighbourhood is striking for its concentration on roads and churches in place of military and official features that were the usual male concern. Most unexpected is the delightful series of maps in which Wilfrid Scawen Blunt recorded his daily progress on horseback through Spain in 1871.

If, as is generally agreed, a book is often no better than its index, how much more does this apply to the index (i.e. catalogue) of a library? There can be no doubt about the size and importance of the BL's map collections; there are, however, justifiable misgivings about the friendliness of the catalogues that give access to them. Any long-standing and sizeable collection is bound to have a legacy of descriptions made at different times and according to different rules. It can sometimes be a disadvantage to have had enterprising predecessors. The earlier the catalogue cards were published, the less they will conform to modern conventions - and the more supplements the user will confront. In many ways the BL was a pioneer. The catalogue of manuscript maps was produced as far back as 1844-61 and the first catalogue of printed maps forty years later. Given the size of annual intake there is never time to recatalogue. The BL has therefore been forced to offer its users a disconcerting array of published and handwritten catalogues organised in markedly dissimilar ways.

Searchers after manuscript maps, presented with a catalogue completed 130 years ago, have always faced the greatest difficulties. To overcome these, a general index has just been completed. It takes the form of a database, running to around 15,000 entries. Because of its interim nature it remains unpublished. Nevertheless, it is now available and can be consulted both in the Map Library, and in the Department of Manuscripts, where most of the described maps are held. A copy is also available for consultation in the newly combined Oriental and India Office Collections in Blackfriars {now, 2008, called the 'Asia, Pacific & Africa Collections', and in the main British Library building at St Pancras}. Thus, instead of having to consult perhaps seventy different sources, some of them unindexed, a single rub of the lamp will now open Aladdin's cave. 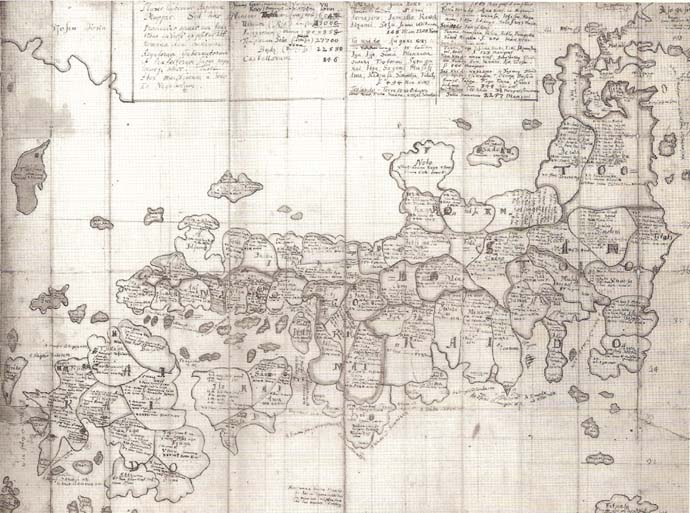 The map of Japan brought back by the German naturalist Engelbert Kaempfer in 1692 proved influential once it was published in 1727. Although it forms part of the British Museum's foundation collection it was omitted from the 1844-61 catalogue of manuscript maps. (British Library, Sloane MS 3060, f.450)

At the core of this new index are the manuscript maps from the three-volume 1844-61 catalogue. To those entries have been added references to several other categories of maps: those missed from the 1844-61 catalogue (just one example: the maps of Japan that Engelbert Kaempfer brought back in 1692 to open the eyes of the West); maps in manuscript atlases for which only generalised entries had been given (for instance, one by Romein de Hooghe); the large and significant quantity of manuscript maps acquired since 1861; some, at least, of the material in the Oriental and India Office Collections; the maps in the Royal United Services Institution collection (with its North American and European strengths); and, finally, non-map materials - for example, letters from cartographers, references to maps, publishing proposals and invoices - all of which fell outside the scope of the published catalogue.

A traditional printed catalogue is frozen in a single arrangement. In the case of the BL catalogue of printed maps, this is an alphabetical mix of places and people. For the catalogue of manuscript maps, a geographical arrangement (now somewhat archaic) was devised in the 1840s. In contrast, our new cumulative index has been created as a database, which can be printed out in a number of different ways. The elements of each entry - author, geographical coverage, date, theme, source catalogue, BL call number - can be arranged in any sequence of columns across the page. The whole database, or a selection from it, can also be sorted into the order required. The following separate indexes are now available:

Two main benefits can be identified as a result of this exercise: a large increase in the number of relevant documents, and better access to them. A significant minority of the indexed maps have never, apparently, been noted before. Many hundreds of others were hidden in non-specialist catalogues, for instance the quinquennial "Catalogues of Additions" (from 1836) and the 22,000 columns of the so-called "Amalgamated Index," in both of which maps play a very small part.

The second benefit is ease of access. Researchers appreciate a quick, full and reliable indication of what might be relevant. They also welcome different possible routes to a given document. The majority of enquiries will probably be geographical. A historian asking for, say, maps of places that figured large in British history, such as Gibraltar, Portsmouth or Plymouth, will find upwards of seventy entries for each in the new index - over a third of them additional to those in the 1844-61 catalogue. It will also be possible to call up all documents relating to an English county, without having to predict the town or parish names that might be involved. For those interested in medieval maps, the chronological listing shows at a glance what the BL holds from before 1500. Likewise, the thematic index groups maps and cartographic documents relating to surveyors, maps in oriental scripts or siege tunnelling plans, for example, while the nominal index brings together all the identified maps and documents in the database concerning named individuals.

The database listing could also serve to inspire future research. A number of the BL's cartographic strengths remain underdescribed and could be used to document, among others, British publishing projects (especially the John Warburton archives, Lansdowne MSS 886-901); the beginning of map consciousness in Britain (why are there so few early references to maps?); the history of map collecting; estate surveys in the context of estate management, and estate sale plans; transport projects (e.g. the early nineteenth century plans of southern England by R.H. Jago); military mapping, fortifications and encampments, particularly in seventeenth and eighteenth century Europe; travel diaries with inserted published maps and views, often from far earlier periods; and portolan and other sea charts including the intriguing Pasterot atlas of 1587 (the last and largest of the Dieppe School works - {Egerton MS 73, the subject of a later Imago Mundi article}).

In case anyone worries that the database lessens the opportunities for serendipity, let them be reassured. Only a tiny percentage of the 300,000 or so volumes in the Department of Manuscripts was actually examined as part of this exercise. Many maps must still lie slumbering; others have been inadequately described. Nothing alters the still largely unrecognised fact that the most likely place for a discovery is in a major library rather than an attic.

References:
1. The database listing forms part of the BL's wider plans to bare its cartographic heart. In 1994, Research Publications International plans to publish the first CD-ROM edition of the BL's map catalogue. The database will help to identify material not in the 1844-61 manuscript map catalogue so that it can be included in a later edition along with, for example, descriptions of atlas maps in which Rodney Shirley is engaged.

{Afternote (2008): the CD-COM was published in 1998 (including the 3-volume catalogue of manuscript maps, 1844-61), and its contents were subsequently incorporated into the British Library's Integrated Catalogue; most of the catalogues of the Department of Manuscripts have been placed on the web; and see Rodney W. Shirley Maps in the Atlases of the British Library: a Descriptive Catalogue c.850-1800 (London: British Library, 2004), 2 volumes and CD with indexes [ISBN: 0712347992], which describes the contents of 3,300 pre-1800 'atlases'. However, note that for manuscript accessions post-1861, and for manuscript texts of cartographic relevance, the unpublished database, 'Indexes to material of cartographic interest in the Department of Manuscripts and to manuscript cartographic items elsewhere in the British Library' (1992), is still the fullest and most reliable initial source. It comprises 16,000 entries (and a small later supplement), arranged in geographical, nominal, chronological and thematic sequences. Sets of the three typescript volumes are available in the Map Library and Department of Manuscripts.}

2. References to BL manuscript numbers are not given here, since these can be readily obtained from the database. The Map Library will happily supply brief extracts on request, from any of the six sequences.

3. Personal communication from Professor Schilder, Geography Department of the University of Utrecht.

5. Samuel Coleridge's sketch map of a walking route in the Lake District in 1802 came to light after completion of the database. It is Add.MS. 47497, f.4.